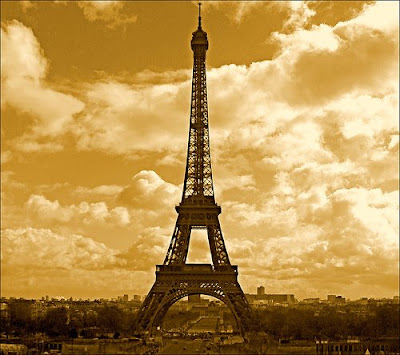 I found this list on Nutshell's blog. You just need to put the things you've done in bold print. Feel free to copy and paste this to your own blog too! I think I counted that I've done 43?! I would say going Paris is the top of my list...I sooo want to see Paris....

2. Slept under the stars

3. Been a part of a hockey fight

6. Given more than you can afford to charity

13. Watched a lightning storm at sea

14. Stayed up all night long and watched the sun rise

16. Gone to a huge sports game

17. Walked the stairs to the top of the Statue of Liberty

18. Grown and eaten your own vegetables

19. Looked up at the night sky through a telescope

20. Had an uncontrollable giggling fit at the worst possible moment

23. Taken a sick day when you're not ill

28. Had a meaningful conversation with a beggar

32. Danced like a fool and not cared who was looking

33. Adopted an accent just for fun

34. Visited the birthplace of your ancestors

35. Felt very happy about your life, even for just a moment

37. Had enough money to be truly satisfied

40. Gone on a midnight walk on the beach

48. Ever worn a superhero costume

50. Lounged around in bed all day

54. Gone to a drive-in theater

55. Done something you should regret, but don't

56. Visited the Great Wall of China

63. Got flowers for no reason

65. Spoken more than one language fluently

66. Gotten into a fight while attempting to defend someone

68. Read - and understood - your credit report

69. Recently bought and played with a favorite childhood toy

70. Found out something significant about your ancestors

71. Called or written your Congress person

72. Picked up and moved to another city to just start over

74. Helped an animal give birth

75. Been fired or laid off from a job

79. Driven any land vehicle at a speed of greater than 100 mph

80. Hiked to the bottom of the Grand Canyon

81. Slept through an entire flight: takeoff, flight, and landing

82. Taken a canoe trip that lasted more than 2 days

84. Had your picture in the newspaper

85. Read The Bible cover to cover

86. Changed someone's mind about something you care deeply about

87. Gotten someone fired for their actions

90. Caught a fly in the air with your bare hands

93. Taught yourself an art from scratch

94. Killed and prepared an animal for eating (Fishing and deer hunting)

95. Apologized to someone years after inflicting the hurt

96. Communicated with someone without sharing a common spoken language

97. Been elected to public office

98. Thought to yourself that you're living your dream

99. Had to put someone you love into hospice care

100. Sold your own artwork to someone who didn't know
****NOTE the picture can be found in Toni's photostream

Okay, I posted over on my blog too. I've done 39 things on the list.