I should be watching the debate. Ok I was...and I just had to take a break so here I am. On sunday Dh used some of the apples from the orchard to make apple fritters. They were amazing. I know it's not the most gourmet picture but I wanted to show them off. 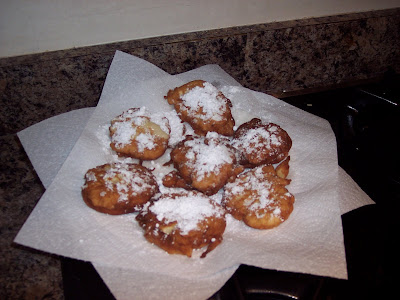 Now I have done some more sewing. I had planned on making 4 gateau pincushions using Fig Tree Quilts' pattern. I don't make half square triangles very well so I counted out some thangles and started sewing. Somehow I ended up counting wrong and now have 8 pieced blocks for pincushions!!! Yes ....8..and what am going to do with 8???? 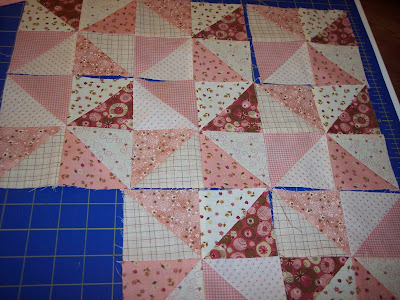 Anyhow, so far one done...and several in various stages of production.....
I have already given this pincushion away to one of my staff who said she only had 1 pincushion. I knew she'd appreciate it. I still need 4 pincushions for gifts....and that will leave 3 if I can get them done. Perhaps a giveaway is in the future...when I finish them! 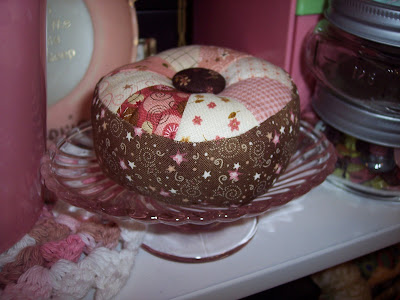 I just finished watching the debate, and I am glad that you were able to update your blog! I needed the break too. Anyway, Apple Fritters looks delicious. I can almost taste them through the computer. Wouldn't that be great if we could smell them through the screen. I love your pincushion! Very beautiful!!

oh gosh those look good, both the fritters and the pincushion! did you use the Fig Tree pattern? I'm waiting for my pattern to arrive.

That pincushion looks as yummy as the apple fritters! I invite you to come and enter my FALL INTO FALL "I Want Candy!" giveaway.

Vickie I am salivating at the thought of the fritters and hey, you can't have too many pincushions!! I love this idea, I have a few orphan blocks I could do this with too..


Lissa
PS the pinwheel blocks look great, I love the fabric you have used!

The fritters look delish and the pincushion.... LOVE IT! It's very trendy in the pink and brown. I'm loving that color combo for this season. Punkie Girl wears lots of pink and brown these days.

I love the pincushion! The colors are great together! The apple fritters look yummy!

What yummy-looking apple fritters. My hubby would love those. Love the color choices in your blocks; that's going to be such a pretty quilt.

Oh it is a darling pincushion!

They're adorable Vickie -- I love the pink and brown! Sorry I was out when you called about the fritters -- I'll be there next time!!! LOL!!!