That's right, last Thursday while on our way to Florida, we traveled on a plane, train and automobile...AND a boat!
It was Elly's first time on a plane, train or a boat! When the plane took off, she said "this is awesome".
Boy was I relieved.
It could have gotten ugly. You just never know how kids will react.
Anyhow, she was such a good girl that I even had a chance to stitch while we flew.
This is another Buttermilk Basin stitchery. 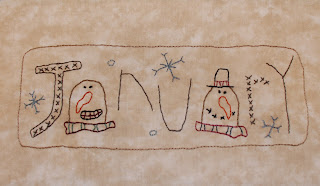 I know it's not January...
however, in my defense...
I didn't have the October stitchery pattern.
I really wanted to stitch one of these up during my trip so I was pleased that I finished it.
Now should I frame it? or make a pillow?
There is a stitchery for each month...so a frame might be best.
I haven't decided yet, but in the mean time I traced February and March!
I see another road trip in my future so going to be prepared.
And I did stitch on my Simple Pleasures as well...so much detail that I still haven't finished another one.
Maybe tonight during Dancing with the Stars??? I'm hoping.

That is a really cute stitchery and I vote for the frame. BTW, that was a really funny movie!!

I think the frame sounds like a lovely idea! and the snowmen are so cute!

If the stitcheries are of similar size, you could use one frame and change them out each month! So cute!

Very cute stitchery, I hope you show us each month when you are finished with it. I vote for the frame.

You are keeping busy. Frame it. that's my vote. Would look very cute, hanging on the wall.

What a fun trip. Lot's of fun experiences. And I love your stitchery too.

I love all of buttermilkbasins patterns! I have done all the months and LOVE them. It is so fun to change them out every month. Your Halloween ornies above are super cute!