Weekend of Success and Failure

In Baking that is. 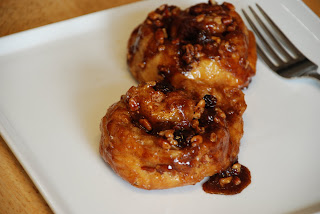 I made successful Sticky Buns from Barefoot Contessa's recipe on the Food network.
It's really decadent.
Buttery, sweet, crunchy...delicious.

Then...I got REAL brave and tried to make Strawberry Lemonade Cupcakes....
Like these that I saw on Pinterest. 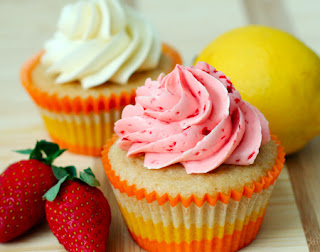 {picture from LoveandOliveOil blog}
Hmm....don't even get me started about Pinterest. It's addicting.
I digress...
the cupcakes....well the cakes themselves were divine.
I whipped up the batter in no time and had them baking.
It's a delicious recipe that would make again.
Then I tried to make Strawberry Buttercream.
I have never made buttercream.
I could go on and on about this but basically I don't know what went wrong.
It was perfect until I added the Strawberries.
After spending 30 minutes trying to selvage the buttercream, I gave up and used canned frosting.
Horrible I know.
I may never try buttercream again.
Then I read the blog post attached to the recipe and realized the recipe creator had the same problem with the icing.
Drat!
I could have avoided using that buttercream recipe had I read the blog post BEFORE baking.
Live and Learn.

I've made buttercream hundreds of time successfully but I've never added anything to it. Must be the strawberries.

I'm trying to learn the phrase, good enough,,,,so your cupcakes are good enough

Did the strawberrries curdle the buttercream? I have added cocoa powder to buttercream but nothing else! It is disappointing when things don't work out especially when they sound so full of potential..

The pioneer woman has a recipe everyone raves about for buttercream frosting. Sorry you had frustration though!

It all looks and sounds delish; canned frosting or not. Sorry you had issues with the buttercream. It can be very finicky.